Commuting for Work, School or Play

For many of us, the question is not “do I commute?” but “how will I commute?”

Sitting in a car is not always the best way to get to and from work or school. Walking or cycling is certainly a great choice, but for many commuters rail transportation is the most preferred way to travel.

It gives people a chance to relax, catch up on emails, homework or social media and it’s also a great way to either gear up for the work day or unplug and unwind after the work or school day is done.

Then, there is the topic of air quality and pollution, especially in the denser urban areas. We all know that lowering our carbon footprint should be a priority and what better way to accomplish this than by rail? The growing number of cars and trucks on our roads threatens the safety of our families and the quality of our lives. Speak to anyone who travels by rail if they would consider getting to work by automobile and the answer will be an unequivocal…no way!

Call it light rail, commuter rail, sky train or subway: the experience of commuter’s everywhere clearly demonstrates that rail is the preferred way for moving people safely, comfortably, efficiently and economically. Ask any Islander who has driven over the Malahat on a dark and rainy night if they feel safe. Drivers will already know the answer. Commuter Rail on the Langford – Victoria run alone would remove the equivalent of 280,000 passenger vehicle trips per year and result in almost 700 fewer cars per day on the Road.

At present, our rail partner, SVI takes the equivalent of 2,900 large trailer trucks off the roads per year. With the proposed upgrades, this number could rise to almost 18,000 trucks per year.

A revitalized Rail Corridor also creates a functional link to the growing communities of Courtenay, Nanaimo, Cowichan Valley, Ladysmith, Duncan and Langford directly to Victoria providing a safer and more efficient way of transporting people and goods for work, trade or recreation.

Connecting Our Businesses to World Markets

There is no question the movement of the products that fuel our economy by Rail is more safe, efficient, economical and environmentally friendly than any other mode of land-based transportation.

Based in Nanaimo, our Rail partner, Southern Rail of Vancouver Island (SVI) a division of Southern Rail of British Columbia with over 100 years of service to B.C. business, provides Island businesses with a seamless rail and sea transportation gateway to the mainland, North American and World markets through its sister company, Seaspan Coastal Intermodal.

Our vision for the Corridor and the business case that supports it are already producing, immediate, positive and tangible results. SVI already has an integrated Freight system in place on the Island moving goods to and from markets around the world. As the result of partial upgrades to the Rail line Nanaimo North, manufactures of wood products can now ship their products to world markets more economically and efficiently. The upgrades have already created jobs for Islanders supplying environmentally friendly yellow cedar for replacement ties for the railway.

But it is still working at minimum capacity. To succeed in todays global economy Island businesses need it working at maximum capacity. Once the Rail Corridor is upgraded, our businesses will have a seamless, competitive advantage for exporting and importing products that is fuel efficient and environmentally friendly.

The Long-term assurance of reliable Rail service at more competitive rates can attract new businesses to the Island and that means more jobs and lower prices for consumers. 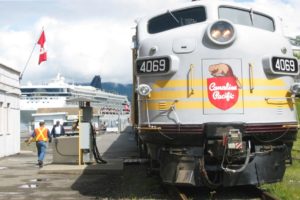 Efficient and affordable Rail is the key to sustainable economic growth for our businesses up and down the Island.

Investing in rail upgrades will result in significant job creation for Island residents that can generate 1,150 person years of full-time equivalent (FTEs) of employment over a three-to five-year period. Wages and salaries are estimated to amount to $52 million. 35,339 passengers traveled by train on the old E&N line in 2007. Imagine the growth potential that modern, high speed trains can have on tourism and small businesses.

An upgraded rail system can increase tourist visits to the Oceanside beach resorts First Nations cultural venues and better service the growing cruise ship sector in Nanaimo, Victoria and Port Alberni by bringing new business to our hoteliers, restaurateurs and retailers up and down our Island.

Rail can also bring new numbers of eco-tourists to their destinations, to vineyards and on dinner train excursions while creating new retail customers for Island businesses. 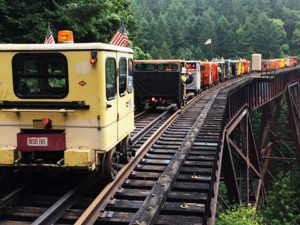 At the Lower Mainland operations, almost one-half of the traffic handled by SRY originates or terminates on Annacis Island where major automobile and forest product distribution facilities are located.
SRY customers include more than 150 shippers of forest, building, agricultural, automotive, chemical, consumer and steel products.

SRY maintains its own fleet of 32 locomotives and its locomotive and car shops provide repair services to both Canadian and U.S. customers. SRY provides specialty railcars to customers and currently has more than 2,200 cars in its fleet.
With 177 employees, SRY handles close to 73,000 carloads annually. It owns more than 125 miles of track of which 62 miles are mainline and interchanges with the four North American Class One railways at six locations. All of these services and facilities are offered to SVI customers on the Vancouver Island line.

SVI serves freight customers involved in agricultural, forest product, propane, concrete, animal feed and fuel products. Significant increases in business with Vancouver Island customers shipping goods on and off the Island have already been made. In the future SVI anticipates further increased business with its existing customers plus additional new opportunities for shipping forest products, aggregates, coal and general merchandise.

SVI also sees additional opportunities to grow the passenger business by working with VIA Rail Canada and others to increase the scheduled passenger, tourist excursion and community passenger rail business.